Fractions Project – What a week!

Posted on May 18, 2020 by highlandnumeracyblog

I was very fortunate last week to be working with an amazing group of P5 pupils from Newton Park Primary School in Wick who volunteered to be part of a project I’m working on.

The lockdown and the current situation we find ourselves in has many downsides, many of which will sadly be long-lasting and/or irreversible.  At the moment, everyone is trying hard to make the best out of a bad situation, myself included, and this week I was excited about the following:

For anyone interested this was the format of our week:

The purpose of the sessions was to support work that we are currently doing around developing The Highland Numeracy Progression (and Northern Alliance Progression) further to include a major update on fractions.  The work will then feed into both face-to-face teacher training and an online module that teachers can work through at their own pace.

The work is fascinating and we think teachers will find it incredibly beneficial when it’s released.

We recorded all the sessions with permission from the parents and pupils with the intention to use them for the purposes outlined above.

Here is a sample of the pupils’ work from a few different days of the project.  At some point, videos will accompany this

Take a look at the work yourself and reflect on:

The images themselves are incredibly rich but the discussions that accompanied brought everything up a level.

The progression in questioning and the numbers selected were carefully chosen, in part based on the responses that pupils gave but also to try and explore some of the ideas that we were particularly interested in… we are not suggesting that this is a sequence that you would typically follow.

___ children in Mrs Ferrier’s class decide to share ___ banana loaf cakes.  If they want everyone to have the same amount with none left over, how much will they each get? 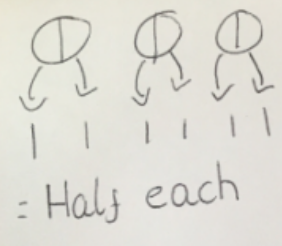 At Toby’s birthday party, he has some chocolate logs for people to share.  If ___ children share ___ chocolate logs and everyone gets the same amount with none left over, how much will they each get? 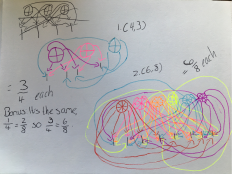 Mrs Ferrier decides to do an art project with the class.  ___ children need to share ___ blocks of clay equally so everyone has the same amount and there is none left over.  How much clay do they each get? 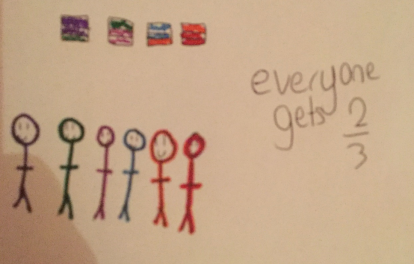 The problem for Day 4 was a little bit different.  We asked the children to look at the work that had been created from the problem set on Day 3 where pupils had written different fractions for the same problem and the problem posed was: 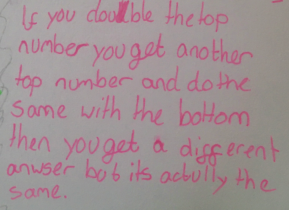 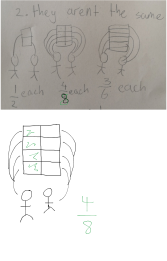 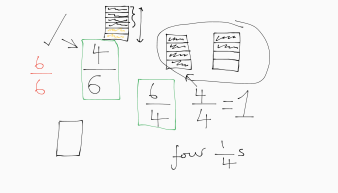 This week, we’ll be doing more of the same but this time with a different year group and a different school.  I’m really looking forward to it.

I’m also looking forward to sharing the outcome, of what has been a huge piece of work, more broadly with others when we put out the updated progression and the accompanying CPD.

This entry was posted in Professional Development, Teaching and tagged fractions. Bookmark the permalink.